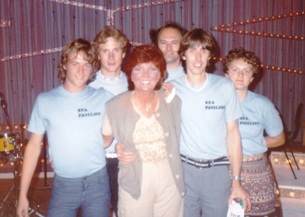 Although, as I said back in chapter one of my story, I had quite a keen interest in stage lighting at the time I left school I was not really able to pursue it to any great extent until 1974 when I began working for Suffolk County Council Education Department. I soon found myself involved with Val Egan and Alan Austin in the conversion of the old Gatacre Road primary school into the South Suffolk Drama Centre. My main role being to design the layout of the lighting grid and to supervise the electrical contractors installing it. I was also the maintenance technician for the centre’s lighting hire stock and I went on to design and operate lighting for a number of shows there; mainly those staged by Alan’s Ipswich Youth Theatre Group. Two which stand out most in my mind were ‘The Owl and the Pussycat’ and ‘The Devils’.

Today, of course, the building is home to the professional touring theatre company Eastern Angles. My original lighting grid is still in use, although it has been added to and updated over the years.

I first met Olga Ironside-Wood, who at the time was County Drama Adviser, whilst I was involved in the making of a series of drama teaching videos at the South Suffolk Teacher’s Centre in Ipswich.

Olga had written a play telling the life story of Cardinal Thomas Wolsey which she called ‘The Ipswich Boy’. It was to be performed in Ipswich as part of the Queen’s Silver Jubilee celebrations. She asked me if I would like to be involved and I ended up working alongside John Rowe creating and recording the sound effects.

John and I working in his studio

Olga was very precise about the effects she wanted and, although John worked for the BBC, he could find little suitable even in their vast library of effects. So it was that we spent several weeks visiting churches in Suffolk to record their bells pealing and tolling, and a whole morning at a remote location near Woodbridge – Tunstall I think – recording a group of horse riders arriving and departing complete with the sound of chain mail. Several takes were ruined by aircraft noise from the nearby Bentwaters USAF base, but, we got what we wanted in the end. The play itself was staged at Ipswich Corn Exchange in either July or August 1977 which also gave me my first experience of working in that cavern. I’ve worked in there a number of times since and it doesn’t get any better!

My lighting work largely ceased when I left the County Education service and went to work for BT Research at Martlesham until, in the Spring of 1983, the Rita Turner Dance School at which my daughter Kerri was a pupil presented a show at the Spa Pavilion Theatre in Felixstowe. Whilst I was operating the tabs (curtains) for this show a brief conversation with the theatre’s Resident Stage Manager Mike Creasey led to him asking me to operate the lights for the play ‘Whose Life is it Anyway’ which was being staged there later that year by The Brackenbury Players. He would normally have done this but the show’s producer, Bert Ainsworth, had persuaded him to act instead.

Following this demonstration of my talents, and much to my surprise and delight, Mike invited me to join the theatre’s professional stage crew, as the lighting board operator, for the 1983 Summer Season promoted by John Redgrave. I think I’m right in saying that I was the first, and probably the only, person who was not a member of John’s own crew to be entrusted with operating the lighting board for him. We got on extremely well and over the following two or three Summer Seasons John taught me a great deal about cabaret lighting and presentation.

After spending a couple of hectic, but interesting, evenings helping to rig and focus the lighting for the Summer Season, my very first professional show starred Sir Harry Secombe supported by the female trumpet player Joan Hinde. I freely admit to never having been so nervous in all my life as I was when Sir Harry stepped out onto the stage and I suddenly thought ‘what am I doing here’? You see, as is sometimes the way in the entertainment world, I had slightly ‘over sold’ my experience of professional lighting when I first spoke to Mike. All went very well though, despite me almost having a collision with a certain gold Rolls Royce with the number plate HS 1 as I was going down to the theatre for the Saturday matinee, and by the time I got to working with Cilla Black I was almost an ‘old hand’. I thoroughly enjoyed the job and I remained the professional lighting board operator at the Spa Pavilion for 21 years. However, even after all that time and literally hundreds of professional shows with all kinds of stars, I still felt nervous sometimes before the curtain went up.

I have also been persuaded to ‘tread the boards’ occassionally; as a definite amateur. Amongst the roles I have played are a salmon poacher in ‘The Amorous Prawn’, Tim Bobbin (typecast as the village idiot) in ‘Murder in the Red Barn’ and the ‘Fairy Godfather’ in a spoof version of the pantomime ‘Cinderella’. This was written by the then Resident Stage Manager at the Spa Pavilion, Denise Newton, and performed by the stage crew and friends very late at night after the final performance of Dennis Lowe’s real pantomime ‘Cinderella’. Only a specially invited audience, including Dennis Lowe, were allowed to watch and large amounts of ‘falling down waters’ were consumed both before and during the performance! Great fun was had by all concerned though and, of course, any resemblance to Denise’s original script was purely accidental.

As well as working backstage in theatre and treading the boards I have appeared briefly on television and radio. In 1995 I was featured in two episodes of a Sky TV series called ‘StageStruck’. The series looked at various aspects of an amateur production and my part, which was filmed at the Spa Pavilion, was to discuss and demonstrate safe methods for rigging of lighting equipment and the creation of gobo effects.

In 1998 I was interviewed on BBC Radio Suffolk by Lesley Dolphin and David Webb about my involvement in theatre lighting. I did a similar interview – this time with Lesley only – in 2001.

My interest in pop music began in the late 1950’s when as a young boy, probably aged ten or eleven, I can remember listening to Radio Luxemburg and following the growing rock ‘n’ roll revolution. This was done with some difficulty because the signal was rather poor and my parents were not too keen on me re-tuning their wireless set. For some obscure reason I remember in particular the Request Show theme tune, Duane Eddy’s ‘Because They’re Young’, and the advertisement for Horace Batchelor’s infallible method of selecting your football pools entry!

With the explosion of pop music and the help of offshore (pirate) radio this interest grew as a teenager through the sixties, remained in the seventies and eighties through of my disco and Hospital Radio work and continues today because, being involved with entertainment and broadcasting, I have to maintain some interest in the current music scene!

In a way though I am luckier than many of my friends from the 60’s because, through my theatre lighting, I have actually met many of my idols from that era. There is one person though who I have yet to meet and that is Helen Shapiro. Being close to my own age she was the girl of my dreams in the 60’s; still as they say, there’s always tomorrow.

During my twenty one years of professional lighting I met and worked with many stars; sadly names such as Les Dawson, Larry Grayson, Leslie Crowther, Sir Harry Secombe, ‘Mr Drifter’ Johnny Moore, Bob Monkhouse and Danny La Rue are no longer with us, but others including Lenny Henry and Daniel O’Donnell have gone on to become big stars. I have a large collection of signed photographs of many of them and, for the most part, they have all been very pleasant to work with. I do, though, have certain favourites:

For an expert knowledge of how to give an audience what they want;

For being just thoroughly nice people to work with;

Amongst all the people I’ve worked with Rolf Harris still stands out for me, despite recent developments which have shown him not to be the nice person he appeared to be. As I have said in an earlier chapter, I first met Rolf at Hospital Radio’s 10th birthday event and I’ve worked with him several times since. On each occassion I have found him to be a pleasure to work with and an excellent entertainer.